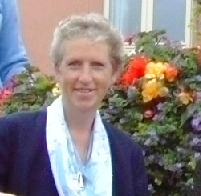 Get in touch with Jackie

Jackie was elected to Wellington Town Council in May 2007. She is currently the lead councillor for the emergency planning committee, member of the finance committee and a council representative on Wellington Chamber of Commerce and the newly formed Youth Centre Committee. She also represents the town on Taunton Deane Borough Council.

Since being on the council she has been actively involved in the petition for a Northern Relief Road, a volunteer at the food town events and has actively served alongside Andrew as Mayoress since 2010.

Jackie also enjoys helping people in practical ways and especially enjoys working with children and young people. She was a regular volunteer at the Unit 6 skate park until it closed in 2008.

Jackie was born in Wellington in 1963. She is married to Andrew Govier and they have two daughters Christina and Catherine.

She was educated at St Josephs Convent and Taunton School. She trained as a florist and worked in the local family business of Judith Goss florists for eight years.

After having children, she went back to college and qualified to work with children. She has worked at the Hollies Family Centre, Taunton, Wellesley Park Primary School and currently works for SeeAbility as a care worker.

She has also been a volunteer with Barnados and the Tiverton and Culm Valley Association for Special Needs.

Jackie is a Christian and an active member of St John’s Parish Church in Wellington.