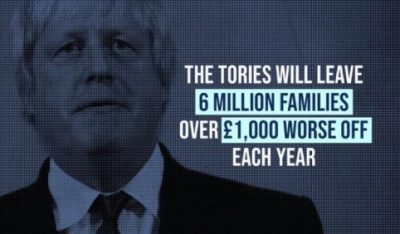 11,855 people in Somerset £220 down by Christmas – the true impact of Universal Credit Cut revealed in new analysis. As the Conservative Government prepare to slash Universal Credit for 11,855 people in Somerset, new analysis reveals the cut will leave families £220 worse off by Christmas. The Universal Credit cut comes in on Wednesday 6 October, leaving recipients facing 11 weeks of reduced support before December 25th. The cut comes amid a wider squeeze for working families including rising energy prices, the proposed National Insurance hike and widespread fears that the Conservatives plan to raise council tax to fund its social care commitments. Cllr Kathy Pearce, Deputy Leader of Bridgwater Town Council, said “The timing of this cut is particularly callous and an absolute disgrace, given that it will hit the lowest paid just a time when we are going into the winter months.  Rising fuel bills will be a double whammy and will cause severe hardship to the most vulnerable in our society.”

Cllr Leigh Redman Somerset County Labour group Leader said, “Working families in Somerset are taking an absolute battering from this Conservative Government. Higher tax, lower support and rising energy prices – this is a perfect storm and local families are being abandoned by this Tory Government just when they need them most.”

“Ministers like to pretend that this crisis won’t hit families hard, but the truth is that those on Universal Credit will be down £220 by Christmas alone – that’s more than half the average family Christmas budget. People in Somerset need real support, but all they get from this Conservative government are empty slogans and a cost of living crisis that could ruin Christmas. As we head towards a Unitary Council, Somerset deserves better.”

Leader of Sedgemoor District Labour Group, Cllr Brian Smedley said “This will also put increased pressure on foodbanks and at the same time take cash flow out of the local economy. The result is driving people into poverty and makes a complete nonsense of the Tories so called ‘levelling up’ agenda.  ‘Heat or Eat’ is not a choice the Tories are facing themselves. This is typical old school Tory workhouse mentality. They think the poor are lazy. In fact, this is a lazy policy but a vicious attack on those who can least cope.”

Cllr Mick Lerry (Labour Victoria) said: “Boris Johnson can crack jokes in his speech to the Conservative Party Conference, but he was absolutely silent on the problems facing the country today. The 20£ Universal Credit being withdrawn from working families today, along with the increasing costs of energy and food will only force people into levelling down. Boris does not care about the pressures facing the economy, as he refuses to accept there is a problem with the shortages in the labour force and the damage to the supply chain. Boris does not like reality, he prefers to deliver jokes to his audience to that of sorting out the damage to the decline in peoples’ income ,with the withdrawal today of the Universal Income uplift. ”

The Universal Credit cut comes into force on October 6. There are 11 full weeks
between October 6 and Christmas.https://www.bbc.co.uk/news/uk-41487126

In September 2020, analysis by the Joseph Rowntree Foundation (JRF) found that the withdrawal of the uplift will risk bringing 700,000 more people, including 300,000 more children into poverty. It could also bring 500,000 more people into deep poverty (classified as being more than 50% below the poverty line). 5 million families claim Universal Credit, including over 3.5 million children.

Combined with those claiming Working Tax Credits, this cut will impact 6.2 million families