Bridgwater Town Council was re-established in 2003 and  is Labour controlled. Until 1974 Bridgwater had a historic ,always radical and mainly socialist Borough Council, but this was destroyed in the local government reforms  of that year which saw it subsumed by Sedgemoor District Council – better known as ‘direct rule from Cheddar’. From 1974 until 2003 Bridgwater existed solely as a group of ‘Charter Trustees’ which comprised of the Bridgwater Councillors who were elected to represent Sedgemoor simply sitting as an advisory board for the town. This was a totally powerless body and designed to keep Bridgwater subservient to Sedgemoor. Full powers were regained in 2003 (although Tory councillors voted against this) and the town has been Labour controlled ever since.

The Mayor of Bridgwater is elected every year from amongst the 16 town councillors. In 2019-20 it was Tony Heywood.  The current Mayor (since November 2020) is Leigh Redman

The role of Mayor is a ‘civic and ceremonial ‘ one and includes the role of chairing Council meetings.

The Leader of the Town Council is Brian Smedley and the Deputy Leader is Kath Pearce.

Bridgwater Town Council operates on a Forum system which involves members of the public in it’s decision making with named councillors taking the lead. This includes

Your town councillors are grouped by wards (see map), Click on the link to find how to contact them 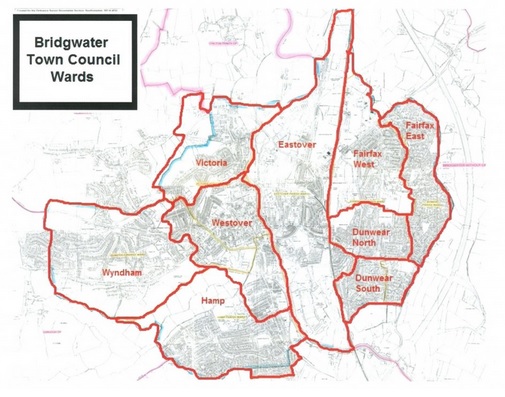