Boris Johnson (a Prime Minister) has finally called in the military. At yesterdays press conference to announce the roll out of the vaccination programme to fight Covid, BJ introduced us to Brigadier Phil Prosser of the 101st Logistics Brigade. Brigadier Phil explained what logistics meant “First we identify the problem, then we decide what to do about it and then we do it”. Brilliant. The complete opposite to Boris Johnson’s approach these past 9 months. First the problem happens, then you ignore it, then someone tells you what to do, then you have a go at something mildly similar, then you change to a totally different plan, then it gets worse. So now we have the military involved, 3 new vaccines to choose from and a population crying out to be vaccinated let’s see if ‘this time’ we can ‘Get Vaccination Done’. But just to be sure…and not saying we don’t have complete faith in Mr Brexit, today the Labour Party and the trade union movement also launched Let’s Vaccinate Britain – throwing all of our collective strength behind the national effort to get people vaccinated under the slogan ‘From volunteering with our NHS to reaching out to family and friends, let’s do this together.’

District Labour Group leader Cllr Brian Smedley said “We want to trust the Government. We don’t, but we want to. Because we have to. Even though all that’s left in this ramshackle Tory rump is that bunch of MPs who are solely there because they were Brexit Bonkers. Most of the sensible and capable Tories have been kicked out or took a back seat. So that’s who we have left to ‘get vaccination done’. Fingers crossed ey….”

The first vaccinations have been inserted into the arms of the first lucky Sedgemoor target group and the prime Minister has ‘had a go’ at reassuring the people that 88% of this key group will be vaccinated by 15th February. However, across the district people have been contacting their councillors to ask when their time will come and why they haven’t been notified yet even though they’re in this target group.

Cllr Smedley continued “When this was announced at Council a third of our group actually had relatives who that applied to. Elderly parents within that target range who had heard nothing. So, this is not unusual and will be the norm for a while. The message however is not to contact anyone else but wait to be contacted. They WILL contact you when it’s your turn.  There is no reason we can’t double our efforts once we’ve got into the routine and that can include vaccinating around the clock- the virus doesn’t sleep so we shouldn’t either“

Deputy Labour Leader Cllr Kathy Pearce said “Whilst I celebrate the fact that the vaccines have been developed and tested ready for us to receive, it must be said that at the moment there is a lot of confusion locally about how it is being rolled out.  We applaud the NHS and other staff who are working around the clock, but we do need a clear communication strategy so that we can all understand the rationale of how and when it will be administered, which will hopefully put our minds at rest, at least a little. There are naturally a lot of questions being raised by the public about the vaccination programme. The following website is publicly accessible and is being updated all the time.  It is a really good source and provides links to a lot of information about priority groups, locations, phases etc. I would urge people to use this and share as a go to source of information.”

The website with all the necessary information is here.

Cllr  Mick Lerry (Business and Economy portfolio for the Town Council) said: “It is not in the interest of any political party or organisation for the Government to fail in the roll-out of the first phase of immunisation. This is now the time to make sure the most vulnerable are protected and the infection rate is lowered. We have already heard today that the Oxford vaccine being distributed to GP surgeries has been delayed in arrival, therefore there are still concerns about logistics in the supply chain to get the vaccine delivered and into people’s arms. At a local level the overall picture is not clear and this will be a time for local authorities and the NHS to coordinate what is happening at the vaccine centres, whether they are sports grounds, GP surgeries or hospitals. If volunteers are needed local authorities should mobilises the population and use membership organisations to help, including Political Parties, Trade Unions and St Johns Ambulance. Now is the time for a huge public effort to control the pandemic. Many people in the first phase of the roll out are concerned about when they will receive the vaccine, public messaging would help to inform those anxious to be vaccinated by mid-February. If the first phase can be reached earlier then other frontline workers such as Teachers and Education workers could be next in line’. It is important to put a stop to the damage that this pandemic has inflicted on the vulnerable, education, mental health, business and the Public Health of the nation. By working together, we can win together”.

County Councillor Dave Loveridge said  “ I’m in the next category for inoculation but my eldest sister had her first jab two weeks ago with no ill effects and is having her second jab this afternoon and it has boosted her confidence .A further comment on the schools, I suppose it’s a choice of survival of your family, like grandparents or survival, if no education then where is the next generation of teachers and scholars coming from.”

This is the Front Line

Bridgwater Branch Labour secretary Andrew Jeffrey said “My mum is finally retiring from social services this month, after having to work an extra five years due to the changes to the State Pension Age. So she is close to the vulnerable age category. She works in people’s homes and doesn’t have the protection of a medical facility. And she is struggling to get vaccinated. 2 out of 55 have managed to do this so far. This is the front line. Going by what we have seen so far we can’t believe what the government promise and anything they do will take a lot longer than stated and be done badly, missing out the most vulnerable. By their own best estimates they will have the 22 million most vulnerable people immunised by July, and they are way behind already on that. Workers and the public must demand and force the government setup a vaccination service led by public health officials and with well paid workers not volunteers.” 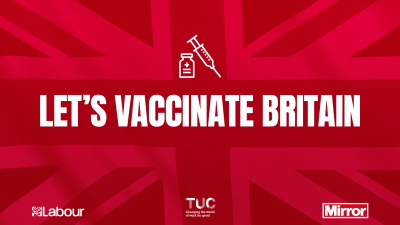 The Labour Party and the TUC are launching a ‘Let’s Vaccinate Britain’ campaign to sign up thousands of volunteers. NHS England is looking for 50,000 stewards to help out at vaccine centres where 14m people will be inoculated by the middle of February.

Together, we want to encourage Brits to get the jab when offered – and make sure their gran and grandad get theirs too. And we believe that everybody has a duty to call out irresponsible anti-vaxxers spreading falsehoods about the life saving vaccines.

Labour leader Keir Starmer and union chief Frances O’Grady have issued a statement “Whenever our country has been at a time of need, the Labour movement has always stood up, moving heaven and earth to help in the national interest. The roll-out of the vaccine is a crucial moment – we are all invested in getting this right.”

Keir Starmer has already urged the Government to use the latest lockdown to create a “round-the-clock” vaccination scheme in order to “end this nightmare”.

As we write, the Covid-19 daily death toll has reached over 1,000 for the first time since the dark days of the first wave in April and London Mayor Sadiq Khan has declared a state of emergency in the capital.

Find out more about how you can help here.