The by-election for the Sedgemoor District Council ward of Highbridge and Burnham Marine set for Thursday 24th January and brought about by the surprise sudden resignation of Lib Dem leader Joe Leach has entered a new phase as the final list of candidates published shows the party in complete disarray with 3 of the 5 Liberals and ex Liberals of varying shades.

Highbridge – the most marginal of all Sedgemoor wards – has swung between all the parties dramatically since the creation of Sedgemoor in 1973 with 15 Labour Councillors, 10 Liberal, 6 Tory and 2 Independents being elected at different times often with minimal majorities.

In 2010 the Lib Dems fatally split in two in Highbridge with the result that two of them stood and were elected as independents. This time round the Lib Dems have moved Helen Groves from Burnham North to stand in Highbridge as the official candidate whilst the Independent Liberals have chosen Sally Williams, wife of sitting independent Chris. To complicate things, Town Councillor Bill Hancock recently left the Lib Dems to become an independent and has now thrown his hat into the ring as a Conservative,

Adding a bit of colour to the election is theatrical agent Purple Watkins, also standing as an independent, but mainly known for promoting the operatic street singing career of his wife Gypsy Watkins (whose idea it was that he should change his name to Purple). Adding to the Lib Dem confusion Purple has chosen yellow posters for his campaign.

Labour: a Serious and Stable alternative 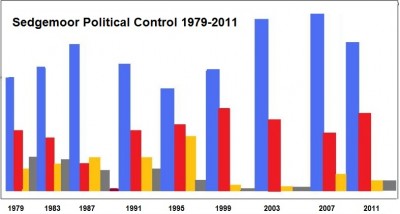 Labour’s candidate is former coal miner Ricky Holcombe who is determined to offer the voters a serious and stable alternative. Ricky said “The Tories are in power in government, on county and in Sedgemoor. They wouldn’t be there without the Lib Dems putting them there so it’s no wonder people are feeling let down by Nick Clegg and co. On Sedgemoor, Labour is the only real opposition and it’s time the people of Highbridge and Burnham Marine were part of a wider movement that had a bit of clout behind it. Never mind the Lib Dems and their internal problems, I’m asking the people to vote Labour and make the real change that matters.”