Following the Bridgwater Labour Party’s victory in the Town and Parish elections this month where they increased their control over Bridgwater Town Council, the annual town council meeting has now been held and new and old faces alike are settling into their roles for the next 12 months. Re-elected as Leader and Deputy Leader are Westover councillors Brian Smedley and Kathy Pearce. Smedley will keep the Finance portfolio and Pearce the Climate Change. Re-joining them on the town executive will be Cllr Mick Lerry (Victoria) with the Economy seat and Cllr Leigh Redman (Hamp) on Property. The remaining 4 members of the Executive are all new. Cllr Tim Mander (Westover) will take the Transport role, Cllr Liz Marsh (Victoria) the Community portfolio, Cllr Irena Hubble (Fairfax West) the Culture, Arts and Heritage job and Cllr Jacqui Solomon (Eastover) the Youth post. Announcing the appointments at the Town Hall meeting Cllr Smedley said that he was re-introducing the ‘Triad’ system whereby each Portfolio holder was supported by  2 other councillors in their role and this would then link into the Forum system where the public, experts and other interest groups could feed into council policy.

END_OF_DOCUMENT_TOKEN_TO_BE_REPLACED

In the newly elected Somerset County Unitary Council it will be the Lib Dems in the driving seat grabbing 61 places and giving them a clear majority. The Tories were turfed out and now languish in opposition with 36 members. Some big scalps were belted in the ‘yellow tidal wave’ including Sedgemoor Leader Duncan McGinty, who was the only one of the cross party ‘Stronger Somerset’ Quadrumvirate not to get elected. Lib Dem District leaders Val Keitsch (South Somerset), Ros Wyke (Mendip) and Federica Smith-Roberts (SwaT) all take their places on the new authority. For the Greens it’s a 5 strong group : 4 of them based in Frome around pioneer councillor Martin Dimery plus one from Upper Tone, Dave Mansell and it’s 5 for Labour, 4 of them based in solid red Bridgwater plus Andy Govier from Wellington. In addition there are 3 independents. At this point in time there’s more questions than answers. Will the Lib Dems drastically change the unitary proposals? Will the squeaky oranges open up the doors of County Hall to a cross party comradarium now they’ve finally  ‘won here’ or will it just be the Tory B Team back ‘inaction’ once again. As Chairman Mao once said ‘Tommorrow begins with a single cautious footstep over the precipice.’

Labour has retained control of Bridgwater Town Council and increased it’s majority to 13.3 against Tories taking back 2 seats including the seat of former Mayor turned Tory, Diogo Rodrigues who was defeated by Labour stalwart Dave Loveridge. The Town Council result saw the Tories keeping just 3 seats, 2 in Wyndham and 1 in Dunwear South against strong challenges from Labour candidates. Town Council Leader Brian Smedley said afterwards “This is a great victory for Bridgwater at exactly the right time. Now is the time to make a pitch to regain the powers we’ve lost over the years since the abolition of Bridgwater Borough. With Sedgemoor going in a years time and the Unitary Somerset seeking to devolve powers to towns and parishes we have exactly the right team in place to run with this and bring back some power and prosperity to Bridgwater. I’d like to thank all our candidates and helpers. We had brilliant support throughout and people worked tirelessly. We have 6 new councillors and the composition is 50-50 male female. Bridgwater done good.”

END_OF_DOCUMENT_TOKEN_TO_BE_REPLACED 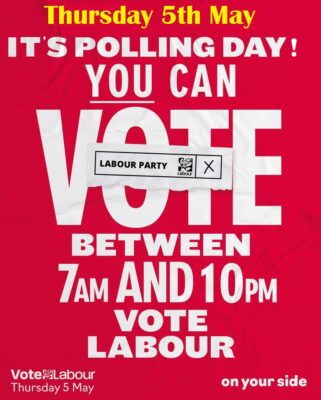 Today is Polling Day across the UK and across Somerset. Here in Bridgwater we are fighting to continue our work on the Town Council and to win seats on the new Unitary Council. Please vote LABOUR wherever you see a Labour candidate in the Bridgwater area. A vote for Labour is a vote to back our call for an emergency budget to tackle the cost of living crisis with a windfall tax on oil and gas profits. It’s a vote to back our plan for warmer homes and to save households across the country up to £600 on their energy bills. It’s a vote against unfair Tory tax hikes. It’s a vote to send the Tories a message they can’t ignore: that Britain deserves better. Honesty and integrity matter in our politics. This week, the Conservatives failed to stand up for either.  Boris Johnson has lost the trust of the public over parties held in Downing Street during lockdown. Now it’s clear he has lost the confidence of his MPs. They can no longer defend the indefensible, and the Prime Minister will be investigated for misleading Parliament. His authority is shot. He is unable to lead, and unable to deliver for the country. We must send him a message.

END_OF_DOCUMENT_TOKEN_TO_BE_REPLACED

Labour’s target in the Somerset elections on May 5th is BRIDGWATER.

Labour controls Bridgwater Town Council winning 12 out of 16 seats in 2019 only losing 2 of the seats by 7 and 1 vote respectively.  Here

Labour currently has 2 of the 4 County seats in Bridgwater (North and South) and seeks to gain the other 2 (East and West) thereby giving them 8 seats in the new County Unitary Council. Here

The Labour campaign has been met with massive support and Tory popularity is on the decline particularly due to the cost of living crisis, the scandalous behaviour of the Tories in Government plus local scandals, the most recent involving Bridgwater Tory Neil Parish. Here

Bridgwater is historically a Labour town and despite incorrect Lib Dem ‘bar charts’ there has been just 1 Lib Dem councillor in the town at any level for over 20 years. Here

Labour is the main opposition on Sedgemoor District Council but that authority will be history within 12 months and the newly strengthened Bridgwater Town Council seeks to regain the powers it lost to Sedgemoor since 1974 when the popular Labour controlled Borough council was abolished. Here

There are very few Tory activists making an appearance in the campaign and those that do have resorted to illegal flyposting to try to counter the growing Labour poster campaign. Here

In Labour Bridgwater, Tory voters are getting hard to find. This week dozens of Labour poster boards have been going up across the town and the Tories are looking worried. So worried that they have resorted to fly posting leaflets on empty shops and poster boards on empty fields. However, their PR stunt has backfired because of course putting posters on public highways and the outside of empty shops is illegal. You need to get the persons permission, not just stick your awful Tory propaganda there without asking. And of course it also looks bad. What can be more bad publicity for the Tory candidate than drawing attention to the rows of empty shops and closed down factory sites in run down Tory Britain. Locals have also been incensed by the bare faced cheek of the Tories and many posters have already been ripped down.

END_OF_DOCUMENT_TOKEN_TO_BE_REPLACED

You know it’s election time when some inaccurate Lib Dem leaflet turns up through your door saying ‘winning here!’, ‘Only Lib Dems can win here!’ or the latest ‘Lib Dems -Demand better!‘. Well, we can’t argue with the last one…we certainly demand better bar charts than what they’ve been putting out. In the Bridgwater area they have lazily been sending out their ‘only we can win here’ bar charts when in fact the total opposite is the case in this Labour town and where in fact a wasted Lib Dem vote could help the Tories back in. So here we list some real bar charts based on real facts and figures to help people decide how best to vote. (and that’s LABOUR by the way…)

END_OF_DOCUMENT_TOKEN_TO_BE_REPLACED

This week, the Tories have dropped 10 % points in the opinion polls, their Prime Minister and Chancellor have been the first to be charged with criminal offences whilst in office, they’ve introduced a policy to send asylum seekers to Rwanda, several Tory MPs have been suspended for dodgy  or alleged dodgy behaviour, the millionaire Chancellors  billionaire wife was shamed into paying her taxes and the cost of living crisis for the rest of us has hit a new disastrous low. Who on earth is still voting for these people???!!

END_OF_DOCUMENT_TOKEN_TO_BE_REPLACED

Bridgwater Town Council this week formally objected to the outline planning application for the erection of 560 houses  including vehicular, pedestrian and cycle access, car parking, public open space, landscaping, infrastructure and other associated works at Folletts Farm off Dunwear Lane, Bridgwater. Labour’s candidate for the Unitary seat of Bridgwater East and Bawdrip is Dave Loveridge an experienced Town, District and County councillor and former town Mayor who specialises in Planning matters. Dave said “This is over development, it’s too high density, it’s on a flood plain, there’s a lack of adequate infrastructure, too much traffic generation, environmental pollution and loss of wildlife. What’s more with this ‘outline planning permission’ they never stick to it! They change it after it’s been approved. I am totally against this hurriedly contrived application which does not take into account the needs of the new and present residents. “

My observations based on valid planning grounds are:–

❑   Over-development: 560 dwellings on 21 hectares is an unacceptably high density.

❑   Flood plain: The land is on a flood plain and is unsuitable for this massive scale of
development.

❑   Lack of infrastructure: No constructive provision for amenities and services.

Please also note there has been a groundswell of local objection. 57% return on a local questionnaire sent to 300+ residents.

The development is within the neighbouring parish of Bridgwater Without who have also put in objections saying they have ‘major concerns’  which include traffic, infrastructure, density of homes, removal of hedges, that it’s not brownfield then added a raft of policy objections .

Jon Falkingham, Labour candidate for Dunwear South is a campaigner against over development and supports Cllr Bartletts letter and the Bridgwater Without Parish council position saying “We need to avoid the mistakes of the past. Somerset needs planning that is inspiring, accessible, and green. Solutions need to be regenerative, development sustainable and investment should be designed for the long term. We need to build a future where everyone can thrive.”

Frightened almost to death by the global crisis over dependence on Russian energy, Tory Comedy prime Minister Boris Johnson made a mad nuclear dash to Hinkley Point here in Somerset to announce they’d be reversing the mistakes of the past and building a new reactor every year giving what he claimed would be a clean, green baseload of energy amounting to some 24 gigawats by 2050. Hinkley alone he claims will provide the power for 6 million homes (that’s likely the new Quantock road development). This was , he sound-bit, ‘bringing nuclear home’ . But has he got it right? Labour energy commentators are not so sure….